Day 122 - 27. November 2010
The last couple of weeks have been hectic at the school again - but also relaxing, effective, organised, warm and enjoyable - with the arrival of an unexpected temporary voluntary consultant and great social worker. Daw Aung San Suu Kyi is free, all refugees have left Mae Sot and the town and our neighbouring town Myawaddy have quietened down a bit, even though the armed and otherwise conflict in Burma has by no means abated, the Thai side of Moei River celebrated the Loi Krathong Light festival last weekend, with a bang, Pete and me have spent some more time out together to saviour the last weeks of couplehood, thanks to our caring colleagues and I've painted a little aquarell. :-)

"Su Free, Unite & Advance to Grab The Hope"* - Ingenious Journalism in a country with one of world's worst press freedom records
I would like to pay hommage to a headline that was smuggled past the government censorship last week by the FIRST ELEVEN SPORTS JOURNAL by printing some of the letters in a different colour: ‘Sunderland Freeze Chelsea; United Stunned by Villa & Arsenal Advance to Grab Their Hope’. Obviously, the magazine was suspended for 2 weeks after the government cottoned on to the underlying message, but I'd say good on them for getting it out there and read, for their wit and guts - keep on the awesome work all you writers and creatives over there!!
*source: DVB
Posted by Manja at 5:37 pm No comments:
Email ThisBlogThis!Share to TwitterShare to FacebookShare to Pinterest
Labels: Thailand

Day 103 in Mae Sot
Well, the elections happened yesterday and it is probably safe to say that they were a complete and utter failure, if the plan was to have them "free and democratic".
At the end of Sunday, fighting was starting between a splinter group of the Karen-based DKBA and burmese government troops, which escalated today. 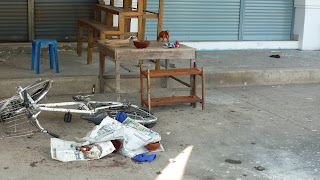 ulted in approximately 10,000 refugees fleeing across the Moei into town today, welcomed by the Thai authorities and supported by local NGOs, which all seemed to work hand in hand in an organised way, suggesting that this was not an unexpected result of Election Day.
Probably unexpected though was the rogue grenade that hit the Thai side near the "Friendship Bridge", killing a dog and injuring a few people.

The Thai army have had reinforcements and are trying to de-escalate. 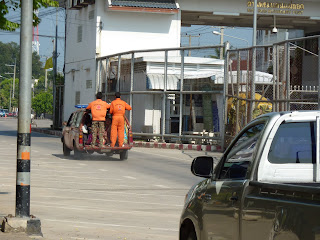 The refugees are currently being cared for and protected in 3 makeshift camps along the Asia Highway.
Here are two NGO workers from the Red Cross escorting one of the many refugee trucks through the blocked-off border area from the river to the temporary camps.
Posted by Manja at 8:26 pm No comments:
Email ThisBlogThis!Share to TwitterShare to FacebookShare to Pinterest
Labels: Thailand

Day 100 in Mae Sot: Everybody's gearing up for the election (or not, as it was)
2 more days! Then our neighbouring country, Burma, is having its first democratic elections since 1990, when the NLD (National League for Democracy) won an absolute majority resulting in their leader, Daw Aung San Su Kyi to be imprisoned, who is currently - 20 years on - still under house arrest.
Most burmese nationals we know here are either excluded from voting, fear for their safety were they to travel back to cast their vote or have joined the NLD-supported boycott of the elections, some hope that the other opposition parties, for example the NDF (National Democratic Force), which split off from the NLD, will be able to continue on a slow political path towards true democracy by securing at least a few parliamentary seats.

The ruling SPDC - "State Peace and Development Council" which is the name of the current military regime, have retired a number of their senior military leaders, so - in coherence with the 1998 constitution (which, incidentally, has been agreed on in a proceedure which seems to have had a similar democratic value as the current elections) - they can head the only party contesting all seats in parliament, the USDP (Union Solidarity and Development Party).

I'm not sure about Europe, but in Asia the upcoming elections do make the news every day:
One interviewee from the closest refugee camp to Mae Sot says he is speaking for many, who "see this election as a fixed political game. It's not going to be just, fair, clean or free and it will not lead the country to the road of democracy. It will give the military regime legitimacy, it will prolong military rule and lead the country to political instability." BBC Mobile News Asia-Pacific 04.11.2010

Some people discouraged by their lack of political options are taking to more desperate measures: The PAC (People Action Committee) is led by one of the leaders of the 1988 student uprising violently stopped by the army, Moethee Zun, and they are planning widespread protests on Sunday. "Asked if the PAC risked provoking violence in Burma, Moethee Zun’s reply was simple. “We are expecting that response,” he said. “We have no choice.” " Democratic Voice of Burma, 4.11.2010

And outside Burma? Here, across the Moei River we hear a lot of carefully voiced hopes for a democratic future for Burma, in which the migrants can return to their homes and families. But we also hear from people who have lost their hope: “I don’t believe in this election,” said Aung Aung, a 22-year-old hospitality worker in the Thai-Burma border town of Mae Sot. “Than Shwe wants to win. I think he will cheat. They’ve been cheating for 20 years up to today.”

"Most migrants are in Thailand illegally – and have no intention of risking the journey home to vote in an election widely dismissed as a sham aimed at keeping the military in power.

Moe Swe, of Yaung Chi Oo Workers Association, said most Burmese in Mae Sot weren’t interested in the polls. “They know the election is not for them,” he said. “They won’t get any benefit… The Burmese people know the election is just about selecting Burmese generals.”DVB, 03.11.2010

Many people here hope that the world will take a close look at Burma this week, despite the country's regime's efforts to keep the world out.

Posted by Manja at 5:00 am No comments:
Email ThisBlogThis!Share to TwitterShare to FacebookShare to Pinterest
Labels: Thailand

Day 97 in Mae Sot
Half the exams are done and my Thai test went well today (I manage to finish and copy it just in time, but the students still found 4 mistakes, ah well...), it is noticeably cooler in the night now - so much so that we are almost complaining about it already... and I have started to think about earning money again, it's my "November Project". Further projects in this month include the creation of training materials for a health and a drama module, planning and carrying out of those lessons and inviting guest speakers for them, initiating a pet club, organising one literature night and one art's night in the house, inducting the 2 new volunteers from Norway and Japan (the first is arriving the day after tomorrow!) and to see the sights with Pete as much as possible, as he will be leaving me next month *sniff!*.
Oh, I'm also the proud owner of a monthly pool "ticket" as of last Sunday - ticket here means, that I have paid my 10 Euros for the month and that the pool attendant has written my name in his notebook, with a date of when my "ticket" is valid to. As he only has about 10 different customers, he remembers us anyway.